Rodgers led the Pack to a seemingly easy victory over the Denver Broncos. He completed 29 out of his 38 passes for 408 yards, second most this week to only Michael Vick. He connected for 4 touchdowns and an interception, his second on the season. He capped off his performance with 9 rushing attempts for 36 yards and another 2 touchdowns, solidifying his 45 fantasy points (ESPN) as the most among all players this week.

Well, I guess obtaining 31 fantasy points (ESPN) is a great way of saying, “Start me, regardless of the fact that I’m listed as questionable.” For anyone who is cautious about starting Wells this week, DON’T BE. If you have this man on your team then you need to play him. The Cardinals are going up against a struggling Vikings team that is still winless, and even though they are in Minnesota, look for the Cards to take it straight at them. The Vikes are playing sub par on both sides of the ball, and I can see the Arizona offense having great success on Sunday. 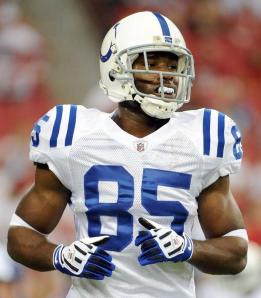 The Colts are suffering this year, off to a winless start, in company with only the aforementioned Vikings. Even without Peyton Manning, they are still scoring decent amounts of points and coming up with some big plays. Pierre Garcon had a huge part in their 17 points against the Tampa Bay Buccaneers last week, responsible for 14 of them. Garcon reeled in just 2 catches for an astonishing 146 yards, both of them TD’s. He may not have had the most yards, or the most catches, but he was the most impressive and scored the most points for any reciever with 26 (ESPN). Indy goes up against the Chiefs this week so prepare for them to possibly snag their first win, and for #85’s success to continue.

Graham is predicted to be the best tight end in the NFL this year. I won’t argue with that so far, the man puts up great numbers. First of all, he hauled in 10 receptions, which automatically gains massive credit purely for the fact that most wideouts don’t get that many catches, let alone that many targeted passes. Now he may have only had 1 touchdown, but let’s remember that he is playing in New Orleans. The offense is pretty deep when you look at it. The receivers consist of Marques Colston, Robert Meachem, and Devery Henderson, and despite how under-achieving they may be, that’s a bunch of big, and usually reliable targets for Drew Brees to be chucking to. Graham gets his respect from me, and with 19 fantasy points (ESPN), most will agree.

Usually you don’t see a defense getting you tons of points in fantasy football, it’s just the element that can give you a little boost. Whoever had the Ravens’ defense this week must have felt like they won the lottery. The Baltimore D finished the day with an astounding 32 fantasy points (ESPN), second most for the entire week! It does help to have 3 returned touchdowns, although I find it kind of amusing that the second highest defensive team this was the Jets, the team the Ravens played. To show how high the defense really scored, the third highest team, Detroit, scored less than half of what Baltimore did.

1 Response to Fantasy Football Week 4: Best of the Best